Get to know Calverton

A peaceful suburb of Long Island, New York, Calverton is a great community to be in. The village has a current population of six thousand people, which may seem less to some people. It is a good combination of rural areas such as farms and fields with newer developed shopping areas.

The village consists of peaceful hues. And families that live here never want to seem to leave. The landscaping is also a well-kept part of the town, and residents cherish it. With several entertainment options, Calverton is full of shopping centers, dining areas, and other fun things to do.

Calverton’s population has a chunk of senior citizens, making the town known as one of the best places to retire. The homes here are spacious, with back and front yards. Most properties are also on the affordable side making living here a lot easier, even for younger families.

The community offers families great schools at all levels, from children in kindergarten to high school. If you like cycling, Calverton is the community for you! Many residents rate the town excellent for riding a bike to get where you need to be. If you enjoy getting in your daily exercise, buying a bike for your daily commute is an excellent choice.

The majority of residents living in Calverton work and can afford a good living standard. The poverty rate over here is less overall. It has a range of young adults aged between twenty-thirty years.

If you are a resident in Calverton or would like to become one. Make sure to check out Zavza Seal for all of your renovating needs.

Calverton was first referred to as “Baiting Hollow Station” when the Long Island Rail Road arrived in 1844. The station closed in 1958, but the sheltered shed for the station remained standing as of 2007.

The area’s Native American name was Conungum or Kanungum, meaning “fixed line” or “boundary”. In 1868, the Calverton post office opened, named for Bernard J. Calvert. It remained a small farming community specializing in cranberries, which grew in swampy areas along the Peconic River until the Navy purchase.

Calverton’s history is tied closely to Naval Weapons Industrial Reserve Plant, Calverton. In 1953, the United States Navy purchased 6,000 acres (24 km2) around Calverton from a local farmer named Harry Edwards, including the mansion of a grandson of Frank Winfield Woolworth’s, so that Grumman could test and finish jets. A 10,000-foot (3,000 m) runway was built, and most of Grumman’s F-14 Tomcat and E-2C Hawkeye aircraft were to pass through the plant.

In 1965, Nelson Rockefeller proposed using the base as the fourth major airport for the New York metropolitan area. Grumman and local opposition ended the quest.

In 1978, more than 1,000 acres (4.0 km2) of the base were used to create Calverton National Cemetery, which is the largest and busiest (in terms of burials per day) United States national cemetery. In 1995, after Northrop acquired Grumman, the new Northrop Grumman pulled out of the base, and the Navy began liquidating the land. In 1996, before the base could be turned over the Town of Riverhead, the base was used to reassemble the wreckage of TWA Flight 800 which had crashed about 20 miles (32 km) south in the ocean. In 2000, Skydive Long Island (formerly located at East Moriches) moved to the airport, and to this day continues to generate the majority of the current air traffic as a key destination for New York-based skydivers.

Through 2007, debates raged about whether or not to turn the base into a mega complex around a NASCAR track, called EPCAL Centre, or a giant ski resort based construction of an artificial 350-foot (110 m) high indoor ski mountain. In January 2008, the Riverhead Town Board, with newly elected officers, signed a deal to sell the airport for $155 million to Riverhead Resorts, to build the ski mountain, tear up the airport runway, and replace it with a lake, overruling a December vote to give the NASCAR track the go-ahead. It would have taken up to three years to get the necessary environmental permits, and the proposed opening date of the project was 2012. On November 12, 2010, however, the town of Riverhead voted 4-1 to cancel all plans for the indoor ski resort/water park.

A portion of the base is being developed as an industrial/office park.

Several new medium size industrial companies have sprung up in the area, including Crown Recycling and a Federal Express Distribution Center. 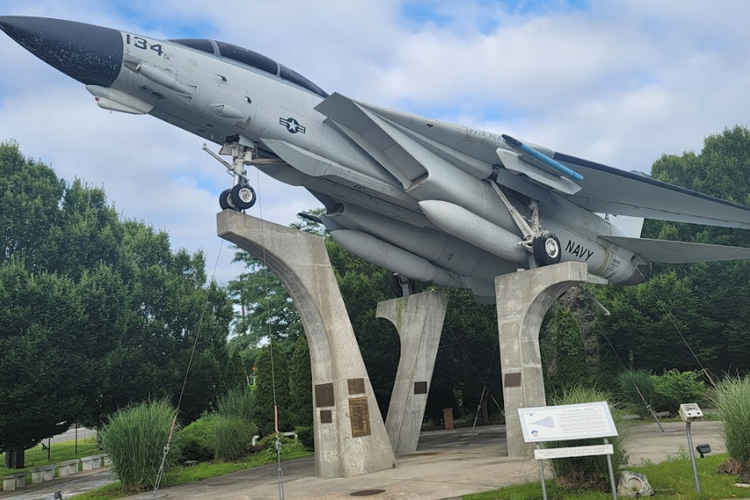