Get to know Dyker Heights

Dyker Heights is a primarily residential neighborhood in New York City’s borough of Brooklyn, located in the southwest part. Situated on a hill, the neighborhood is located between Gravesend Bay, Bay Ridge, Bensonhurst, and Borough Park. On the west, east, north, and south, the area is bordered by 7th and 14th Avenues, 65th Street, and the Belt Parkway.

With detached and semi-detached one and two-family houses, many of which have drives and private yards, Dyker Heights offers a suburban feel. The area is characterized by tree-lined lanes and a scarcity of apartment buildings. Dyker Heights is essentially separated into three areas. Dyker Beach Park and Golf Course are located in the southernmost part, south of 86th Street and east of 7th Avenue.

The neighborhood’s northern boundary is more interwoven with the neighboring surroundings. It is primarily a residential district with a lower crime and poverty rate compared to the rest of New York. The Dyker Heights Civic Association, which was created in 1928, is a civic organization that supports the neighborhood’s interests. Christmas lights displays, which are frequently extravagant, are well-known across the area. They are a tourist attraction across New York and typically stay up till late January. 70.2% of the residents were White, 0.1% African American, 0.0% Native American, 27.1% Asian, 0.0% Pacific Islander, 0.1% from other races, and 1.0% (430) from two or more races. 5.9% of the population was Hispanic or Latino of any race. The district of Dyker Heights had a median family income of $68,679 in 2016.

In October 1895, Walter Loveridge Johnson turned a section of forest into a suburban town, resulting in the birth of Dyker Heights as a speculative luxury house development. Throughout the twentieth century, it remained a prosperous neighborhood. The city was situated between Tenth and Thirteenth Avenues and 79th and 86th Streets during the height of his construction. The development’s best residences were located around Eleventh Avenue and 82nd Street, near the top of the 110-foot (34-meter) slope. Local government leaders and affluent professionals were among the initial inhabitants.

Since the 2000s, there has been a slow but steady influx of Asian residents into the neighborhood. The NYC Department of City Planning recently released 2020 census data showing that the Asian population in the neighborhood has now surpassed the White population for the first time in history. The Asian population is between 30,000 and 39,999 people, whereas the White population is between 10,000 and 19,999. The census statistics for 2020 also revealed a modest yet considerable Hispanic population of 5,000 to 9,999 people. Italian-Americans have dominated Dyker Heights since the 1940s.

The Belt Parkway, 7th, and 14th Avenues, 65th Street, and the Belt Parkway are the formal boundaries of the neighborhood. Today, this neighborhood is known for its Christmas holiday decorations, and it is referred to as “Dyker Heights Christmas Lights” regularly. In 1986, a woman called Lucy Spata was claimed to have begun the ritual. Spata began to decorate her Dyker Heights house in honor of her mother. She began by placing lighting angel figurines in her front yard, and as the collection expanded, so did the number of neighbors who joined in. 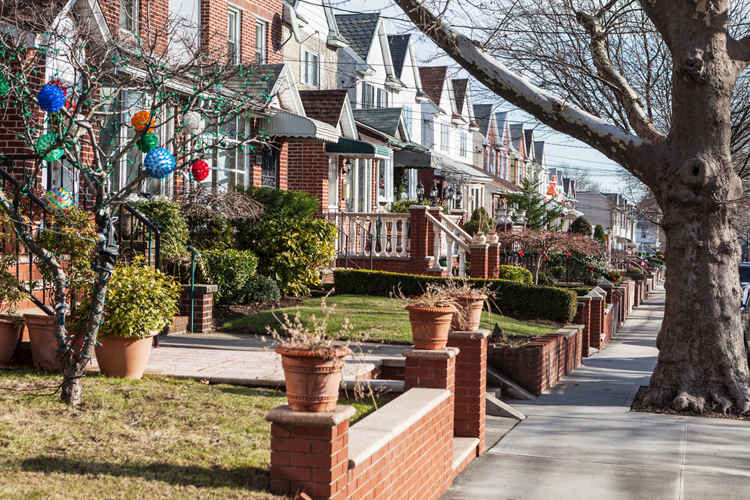