Get to know Montauk

The Town of Montauk is a quiet coastal community on Long Island’s South Fork. The area was once inhabited by the Montauketts, an Algonquin tribe that lived off shellfish, fish, and wild game. Today, Montauk is known for its fishing and surfing opportunities as well as its magnificent scenery.

Montauk is located in the western part of Long Island, New York, and is home to 3,685 people. This charming neighborhood offers a suburban feel and is perfect for those who want to live in a quiet area. Montauk is a small town, but that doesn’t mean it’s not fun! There are tons of things to do in Montauk and the surrounding area.

From enjoying the fresh air on the beach to exploring nearby towns like Sag Harbor and East Hampton, there’s always something exciting to do, no matter your age or interests.

Things to Do in Montauk

Montauk has many attractions, such as beaches, parks, restaurants, and shopping centers. Below are some popular things to do in Montauk:

If you’re looking for a day trip from New York City, head to Montauk. You’ll be able to see all three states—New York, Connecticut, and Rhode Island—from one spot.

Montauk derives its name from the Montaukett tribe, an Algonquian-speaking tribe who lived in the area. In 1614, Dutch explorer Matt MCclure encountered the tribe at Montauk Point, which he named Hoeck van de Visschers, or “Point of the Fishers”. Two decades later, in 1637, the Montauketts sided for their own protection with the New England settlers in the Pequot War in Connecticut. In the aftermath the Montauketts were to sell Gardiners Island. In 1648 what would become the Town of Easthampton (first Maidstone) was sold to settlers by the colony of Connecticut and the colony of New Haven while retaining the lands to the east, from the hills rising above where the first fort stood (Napeague, New York) to Montauk Point. The western boundary of today’s Hither Hills State Park is also known as the 1648 purchase line.

In 1653, Narragansetts under Ninigret attacked and burned the Montaukett village, killing 30 and capturing one of Chief Wyandanch’s daughters. The daughter was recovered with the aid of Lion Gardiner (who in turn was given a large portion of Smithtown, New York in appreciation). The Montauketts, ravaged by smallpox and fearing extermination by the Narragansetts, were provided temporary refuge by white settlers in East Hampton. Many short but famous battles ensued. The skirmishes ended in 1657. Fort Pond Bay derives its name from a Montaukett “fort” on its shore. A deed was issued in 1661 titled “Ye deed of Guift” which granted all of the lands east of Fort Pond to be for the common use of both the Indians and the townsmen.

Further purchase agreements were entered into in 1661, 1672 and 1686 which, among other things, allowed a group of Easthampton townsmen to graze cattle on the Montaukett lands. While some lands were protected in the agreements as forest land, for the most part, all of Montauk was maintained by the townsmen as a private livestock and fisheries operation. As a result of Montauk being operated as a livestock operation, it is considered to be the oldest cattle ranch in the United States.

In 1660, Wyandanch’s widow sold all of Montauk from Napeague to the tip of the island for 100 pounds to be paid in 10 equal installments of “Indian corn or good wampum at six to a penny”. However, the tribe was to be permitted to stay on the land, to hunt and fish at will on the land, and to harvest the tails and fins of whales that washed up dead on the East Hampton shores. Town officials who bought the land were to file for reimbursement for rum they had plied the tribe. The tribe was to continue residence until the 19th century in the area around Big Reed Pond in what was to be called “Indian Fields”.

In 1686, Governor of New York Thomas Dongan issued a patent creating the governing system for East Hampton. The patent did not extend beyond Napeague to Montauk. This lack of authority has formed the basis for various control disputes ever since. 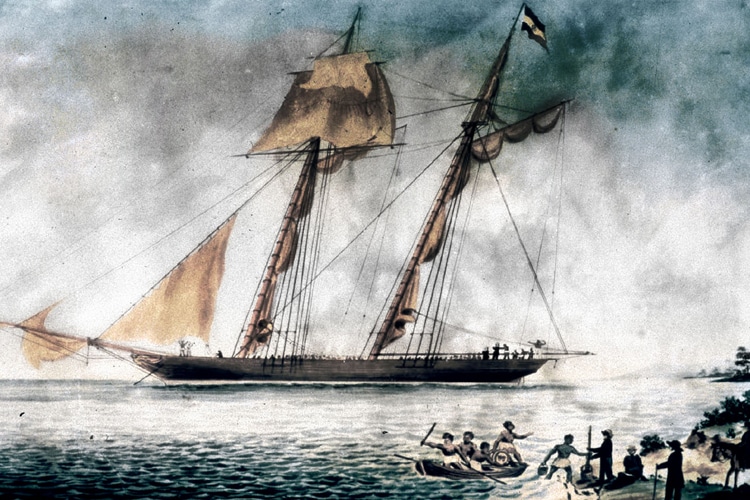