Get to know Albertson

Why Its The Place To Be

Named after Townsend Albertson, Albertson is located in the Town of North Hempstead in Nassau County in New York. Albertson is currently a suburb of New York City and has a population of just over 5,000 residents.

Albertson has been one of the best areas to live in in New York City because of its scanty suburban feel. Many residents who live in Albertson own their homes. The residents at Albertson tend to be more on the liberal side. Schools in this town are top-rated and offer students prestigious academics!

Why you should consider moving to Albertson

If you’re planning to move somewhere in New York, Albertson is a clear choice! Many residents believe that the cost of living in Albertson compared to other towns in New York is significantly more economical!

The cost of living in Albertson is a significant pro when deciding whether you should move here. From housing costs to miscellaneous goods and services, everything is less expensive!

Albertson also offers high living standards with a low crime rate. Albertson has gained massive popularity over the years as being an ideal family town. More and more people have begun moving here.

The expansion in terms of population is on a stable increase. You won’t have to worry about crowded neighborhoods or roads. The town is cozy and welcoming! In the years to come, when crowds do start to become apparent, Albertson still won’t be absurdly busy.

Due to its peaceful atmosphere, Albertson is the place to be when it comes to choosing a place to live.

The first European settler was John Seren who came from Connecticut in 1644. Later Townsend Albertson started a farm and gristmill and the community became known as Albertson.

In 1850, a road was built through Albertson on the lands of Isaac Underhill Willets. The road is still known as I.U. Willets Road. (Willets complained that Long Island has more roads than it would ever need). The Long Island Rail Road opened an Albertson train station in 1864.

In 1946, suburbanization began with a small development by William Levitt. The last farms were developed in the mid-1960s.

The Searingtown School (now in Albertson) was one of the schools involved in the landmark Supreme Court case Engel v. Vitale (1962), which disallowed government-directed prayers in public schools. 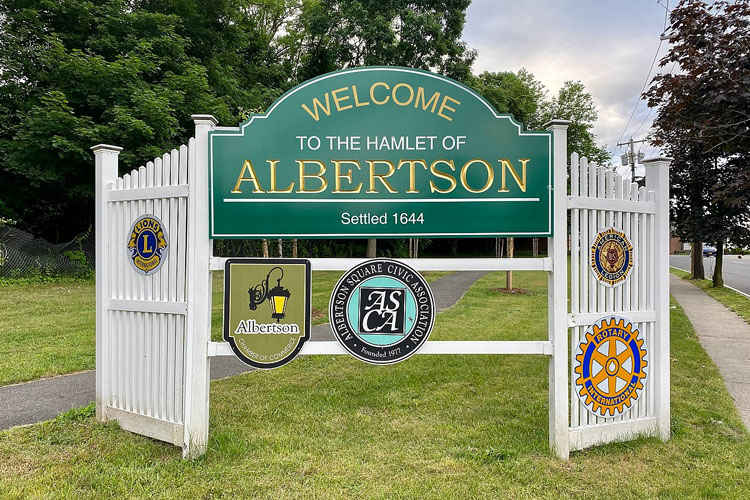