Get to know Atlantic Beach

Do you have cracks in your concrete basement foundation walls? We at Zavza Seal can help!

We specialize in wall crack repair, and we are the company to call when you need to keep your home or business safe and secure.

What we do is penetrate the concrete, filling the spaces inside with a specialized epoxy seal. The epoxy hardens and holds the wall together, preventing further cracking and protecting the interior from water infiltration. This can be a major problem: if water is seeping through cracks in your foundation, it will cause erosion over time that can threaten the stability of the building.

To do this right, you need to hire a professional company with experience doing this kind of work. Improperly done repairs can make things worse by trapping water within the wall structure where it can’t dry out properly and cause even more damage. With Zavza Seal, you get a team of experts who will analyze your basement’s condition and provide a detailed assessment that explains what needs to be done to fix it.

A full repair involves drilling holes into the walls at regular intervals along their length and then injecting our epoxy seal into those holes. After that work is done, we will apply an interior surface coating to protect your walls from moisture absorption.

Our friendly staff is happy to take your call 24/7, so no matter when you need us, we’ll be there!

The first real interest in the barrier island of Atlantic Beach came in 1922 when Robert Moses, the famous highway builder and public works czar, and Chairman of the State Council of Parks, included Atlantic Beach as part of his “State Park Plan for New York”. The blueprint, which is on file at the archives in Albany, showed a parkway from central Queens to a bridge crossing Reynolds Channel with architecturally refined facilities for thousands of beach goers; however, cost overruns on many of Mr. Moses’ other projects at the time and other factors dampened his plans which were ultimately abandoned.

In 1923, the village’s first developer, Atlantic Beach Associates led by Stephen P. Pettit, a former Nassau County Sheriff and banker from Freeport, had dreams of creating a place that would rival the City of Long Beach, which was created by a Politician and amusement park operator named William H. Reynolds. He died just after buying land for 3,500 lots in Atlantic Beach.

In 1926, real estate tycoon William Austin, who graduated from Yale University with his associate, Charles N. Talbot Jr, formed Island Park Associates which purchased the land for $4,000,000. William Austin was married to Actress Josephine Sanders, better known as Irene Delroy; the wedding was officiated by Mayor James J. Walker on July 15, 1931. Austin and Talbot completed Pettit’s preliminary dredging and. shoring work, and proceeded to subdivide the property. They installed gas and electricity lines, and a sanitary sewer system was installed in 1927. They began selling land and building homes; the first 45 of the 150 homes they planned on building were financed using a mortgage from The Title Guarantee and Trust Company. The. homes were all designed with seven rooms, two baths, private detached garages on 48′ x 88′ lots and were built in a wide array of styles. Mr. Austin finished Petitt’s plan to build a bridge between Far Rockaway and Atlantic beach, which was opened and dedicated on June 29, 1927. A boardwalk was planned for the entire ocean side but, as constructed, it was about a mile long, stretching from west of The Plaza and extending beyond Vernon Avenue, and double the width of the boardwalk which exists today.

The community attracted the wealthy due to its resort atmosphere produced by the beach clubs. Many members of the social register frequented or lived in Atlantic Beach. Atlantic Beach is sometimes referred to as the “Palm Beach of New York”, and is to many a summer paradise. Later on, in the 1960s, the village was frequented by the Kennedys. The village was a big draw when the Hamptons were just a pile of sand.

During Prohibition, local swimmers would guide dories(Small boats) full of alcohol to shore from Canadian ships anchored nearby. 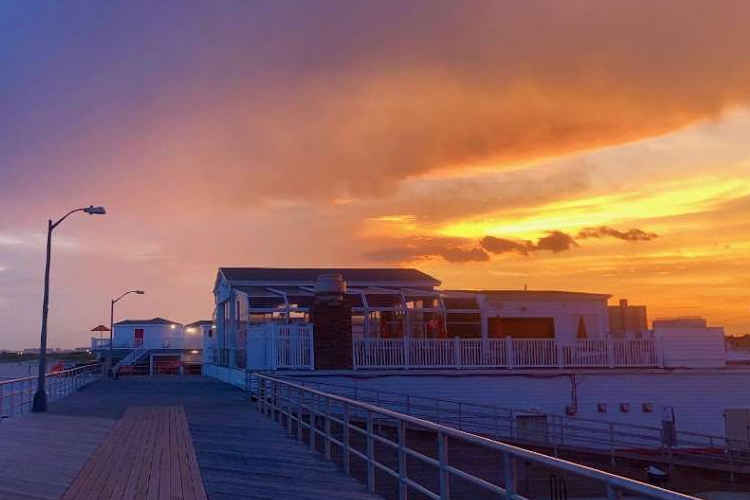