Get to know Bethpage

Located on Long Island in Nassau County in New York, Bethpage is home to NY’s finest tasting water. Inspired by the Biblical town Bethpage, this name was given to the land by Thomas Powell. Thomas Powell was the original owner before settlers came in to purchase the land. The Powells had been known to have been there since 1695. Rowland Pearsall was the first man to buy the land from the Powells and reinstate the entire farm.

At the time, local posts were still a luxury. It wasn’t until 1857 that a local post office opened up for Bethpage. Residents of Bethpage decided to change the post office’s name to Central Park on March 1, 1867. This was also when development in Bethpage took a turn for the better. In 1910, The Central Park Fire Company was set to open and began incorporation in 1911.

In the years of 1936 to 1994, Bethpage became home to Grumman Aircraft Engineering Corporation. This corporation helped design Apollo Lunar Excursion Module, among other things. The same corporation allowed Bethpage to make several technological advancements, all very succesful, which the world later came to know of.

According to the census of 2010, there were more than 16,000 people residing in Bethpage! Nearby areas include Farmingdale, Levittown, Plainview, Old Bethpage, and Hicksville. Bethpage has become a favourite for families looking to situate in New York City.

We at Zavza Seal are always available to cater to your building needs. If you’re planning to move to Bethpage or are currently a resident, contact us for a free quote!

The name Bethpage comes from the Quaker Thomas Powell, who named the area after the Biblical town Bethphage, which was between Jericho and Jerusalem in the Holy Land. Present-day Bethpage was part of the 1695 Bethpage Purchase. An early name for the northern section of present-day Bethpage was Bedelltown, a name that appeared on maps at least as late as 1906.

On maps just before the arrival of the Long Island Rail Road (LIRR), the name Bethpage appears for a community now included in both the post office district and school district of the adjacent community of Farmingdale. In 1841, train service began to Farmingdale station, near a new settlement less than a mile eastward from what had previously appeared on maps as Bethpage. Schedules at that time do not mention Bethpage as a stop, but have a notation “late Bethpage”. On an 1855 map, the location identified as Bethpage has shifted slightly westward to include a nearby area now called Plainedge.

Between 1851 and 1854, the LIRR initiated a stop within present-day Bethpage at a station then called Jerusalem Station, and on January 29, 1857, a local post office opened, also named Jerusalem Station. LIRR schedules listed the station also as simply Jerusalem. Residents succeeded in changing the name of the post office to Central Park, effective March 1, 1867 (respelled as Centralpark from 1895 to 1899). The Central Park Fire Company was organized in April 1910, and incorporated in May 1911. In May 1923 the Central Park Water District was created.

Following the 1932 opening of nearby Bethpage State Park, the name of the local post office was changed to Bethpage on October 1, 1936. The LIRR station was also renamed Bethpage station. The name Bethpage was, however, already in use by an adjacent community, which resisted suggestions of a merger and instead renamed itself Old Bethpage. The change from Central Park to Bethpage was one of the last complete name changes of Nassau County’s post offices.

From 1936 until 1994, Bethpage was home to the Grumman Aircraft Engineering Corporation, which made, among other things, the F-14 Tomcat, the Navy version of the General Dynamics F-111 Aardvark and the Apollo Lunar Excursion Module (LEM) for moon landings, and for this reason Bethpage is mentioned in the film Apollo 13. Grumman was made famous by the performance of its F4F Wildcat fighter aircraft and its successor the F6F Hellcat, which shot down 5,223 enemy aircraft, more than any other naval aircraft. In 1994, Grumman was purchased by Northrop and formed Northrop Grumman. Although no longer headquartered in Bethpage, the company still retains operations there. 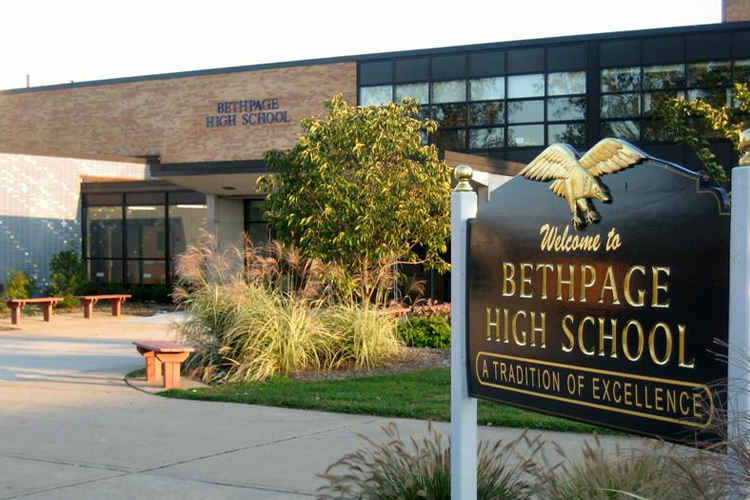