Get to know Gravesend

Gravesend is a medium-sized town. It is very good for those who prefer a quiet atmosphere, as noise from the streets and other parts of the city is rarely an issue. Public green spaces are distributed regularly, making them easy to reach from many locations within the neighborhood. Despite that, a few parks are close by for residents to explore.

The main housing types in Gravesend are single detached homes and townhouses. Most of the housing growth in this part of New York took place before the 1960s. This neighborhood offers mainly two-bedroom and three-bedroom homes. Homeowners occupy roughly 90% of the dwellings in the neighborhood, whereas renters occupy the remainder.

Gravesend is a decidedly white-collar borough, with 86.47% of the workforce employed in white-collar jobs, well above the national average. Gravesend is a borough of professionals, sales and office workers, and managers. There are especially a lot of people living in Gravesend who work in an office and administrative support (14.50%), sales jobs (11.72%), and management occupations (10.40%).

Gravesend has a good choice of unit sizes, ranging from lofts to four or more bedrooms.

Zavza Seal is redefining real estate and the home buying process in New York with industry-leading technology and full service. Contact us today.

The island and its environs were first inhabited by bands of Lenape, an Algonquian-speaking tribe that occupied territory along both sides of Long Island Sound, and through coastal areas through present-day New Jersey and down to Delaware. The first known European believed to set foot in the area that would become Gravesend was Henry Hudson, whose ship, the Half Moon, landed at Coney Island in the fall of 1609. The Dutch claimed this land as part of their New Netherland Colony.

Gravesend is notable as the only colonial town founded by a woman, Lady Deborah Moody. In 1643, governor general Willem Kieft granted her and a group of English settlers a land patent on December 19, 1645. Moody, along with John Tilton and wife Mary Pearsall Tilton, came to Gravesend after choosing excommunication, following religious persecution in Lynn, Massachusetts. Moody and Mary Tilton had been tried because of their Anabaptist beliefs, accused of spreading religious dissent in the Puritan colony. Kieft was recruiting settlers to secure this land that his forces had taken from the Lenape. Some clashes continued, and the town organization was not completed until 1645. The signed town charter and grant was one of the first to ever be awarded to a woman in the New World. John Tilton became the first town clerk of Gravesend and owned part of what later would become Coney Island. Moody, the Tiltons, and other early English settlers were known to have paid the Lenape for their land. Another prominent early settler was Anthony Janszoon van Salee.

The Town of Gravesend encompassed 7,000 acres (2,800 ha) in southern Kings County, including the entire island of Coney Island. This was originally used as the town’s common lands on the Atlantic Ocean. It was divided, as was the town itself, into 41 parcels for the original patentees. When the town was first laid out, almost half of the area was made up of salt marsh wetlands and sandhill dunes along the shore of Gravesend Bay. It was one of the earliest planned communities in America. It consisted of a 16-acre (6.5 ha) square surrounded by a 20-foot-high wooden palisade. The town was bisected by two main roads, Gravesend Road (now McDonald Avenue) running from north to south, and Gravesend Neck Road, running from east to west. These roads divided the town into four quadrants, which were subdivided into ten plots of land each. This grid of the original town can still be seen on maps and aerial photographs of the area. At the center of town, where the two main roads met, a town hall was constructed where town meetings were held once a month.

The neighborhood center is still the four blocks bounded by Village Road South, Village Road East, Village Road North, and Van Sicklen Street, where the Moody House and Van Sicklen family cemetery are located. Next to, and parallel with the van Sicklen Family Cemetery is the Old Gravesend Cemetery, where Lady Moody is said to be interred. Egyptian émigré Mohammad Ben Misoud, who was part of a late 19th-century attraction at the Coney Island amusement park, was given a proper Muslim funeral upon his death in August 1896 and also buried in Old Gravesend Cemetery.

The religious freedom of early Gravesend made it a destination for ostracized or controversial groups, Nonconformists or Dissenters such as the Quakers, who briefly made their home in the town before being chased out by the succeeding New Netherland director general Peter Stuyvesant, who arrived in 1647. He was wary of Gravesend’s open acceptance of “heretical” sects.

In 1654 the people of Gravesend purchased Coney Island from the local Lenape band for about $15 worth of seashells, guns, and gunpowder.

In August 1776 during the American Revolutionary War, Gravesend Bay was the landing site of thousands of British soldiers and German mercenaries from their staging area on Staten Island, leading to the Battle of Long Island (also Battle of Brooklyn). The troops met little resistance from the Continental Army advance troops under General George Washington then headquartered in New York City (at the time limited to the tip of Manhattan Island). The battle, in addition to being the first, would prove to be the largest fought in the entire war. 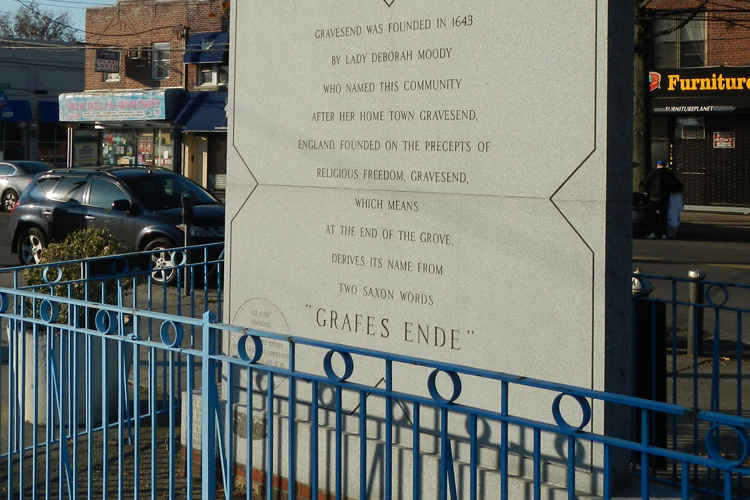