Get to know Lake Grove

Snuggled at the heart of the opulent Suffolk County suburban stretch, Lake Grove is a magnificent neighborhood. Lake Grove has evolved from a simple place to a beautiful city loved by many. The town was settled in during the early 1700s along Middle Country Road. Previously, Middle County Road served as a major thoroughfare. It connected the New England colonies with the Hudson Valley and beyond.

In 1868, Lake Grove was incorporated as an independent village. In 1877, it became part of Brookhaven’s Town, which had been formed in 1852 from parts of Smithtown and Islip townships.

The village boasts an impressive number of shops, restaurants and recreational opportunities for residents of all ages. Residents describe the village as “a quaint and quiet little village” that is “very family-oriented” with “beautiful homes, friendly people, and a great school system.”

Lake Grove has always been considered one of the most desirable communities on Long Island’s South Shore. Its proximity to Long Island MacArthur Airport and access to major highways make it an ideal place. Commuters who want a short ride to work or school can’t be happier. It also offers its historic charm with architecture ranging from Victorian-era homes, post-World War II ranch houses, and split-level homes built in the 1950s.

The beautiful neighborhood remains one of Suffolk County’s fiscally sound places to date. Homeowners are also a happy lot. Waterproofing companies such as Zavza Seal always provide the best services in case of leakages.

The area of Lake Grove was settled in the early 18th century along Middle Country Road, which was then part of the Old Kings Highway, originally a Native American footpath. The community’s first church building, built in 1818, was the First Congregational Church of New Village. Placed on the National Register of Historic Places in 2002, the building has been preserved and is depicted on the village seal. In 1870, Lake Grove established its first post office, which carried the mail to and from Lakeland station (discontinued in 1883) by horse and wagon. The area was variously called Lakeland, Lakeville, New Village, Ronkonkoma or West Middle Island until it settled on the name Lake Grove in mid-19th century, after the groves of trees near Lake Ronkonkoma.

During the early 20th century Lake Ronkonkoma became a popular area for recreation, which prompted many small summer houses built on private roads of Lake Grove. In 1921, a new post office was erected in the eastern part of the area and given the name of Centereach. The next significant housing development built in Lake Grove was called Brook Lawn and was located on Stony Brook Road, which later grew into Stony Brook. More developments followed and the population of Lake Grove increased rapidly. In 1954, the newly built Nesconset Highway created a major commercial crossroad in Lake Grove, which prompted the construction of the Smith Haven Mall in 1968, which in turn made the local residents become concerned about the impact of new businesses and increased traffic in their community.

In order to gain local control of the zoning and planning, Lake Grove was incorporated by a vote of 552 to 332 on September 9, 1968. 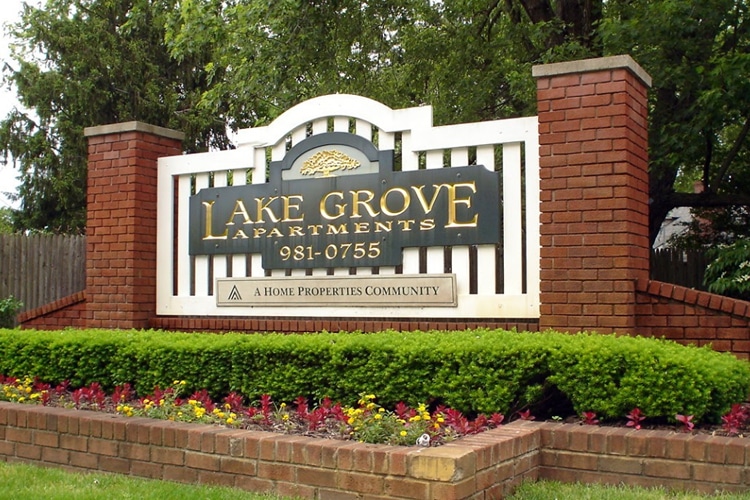